Working full-time leaves far too little time left over to cook. In my utopia we’d all be working three hours a day, followed by two hours food shopping at a cheaper version of Borough market, before cooking all afternoon and eating all evening. But before that’s been turned into a workable economic model, we have to make do with simpler things, like Swedish rösti with caviar. Quite a light supper, it’s a perfect snack before going out (don’t worry, that kebab in the wee hours of the morning will keep you from starving).

Making rösti is very easy, and you can take it quite far from its humble origins if you top it with fresh Swedish ingredients like gräddfil (sour cream), dill, spring onion and caviar. What with IKEA’s food empire being spread all over the world, you can buy Swedish caviar very cheaply. This isn’t fancy caviar in any sense (it comes from the herring), but it’s still salty and delicious.

Start by chopping and frying half of the onion on a low heat. Peel and grate the potatoes, and mix in the onion. Also add half of the dill, the egg and salt to taste. Form the mix into flat rounds, about half a centimeter thick, and carefully place in a non-stick pan, on a medium heat with plenty of oil and butter (a mix makes for the best flavour – it’s not meant to be a health meal). Flatten the cakes with a spatula once they are in the pan, as that makes them stick together better. Let them fry about 4 minutes on each side, until they are golden. Carefully lift them out of the pan onto kitchen roll, and keep frying these until you’ve used up all of the mix. 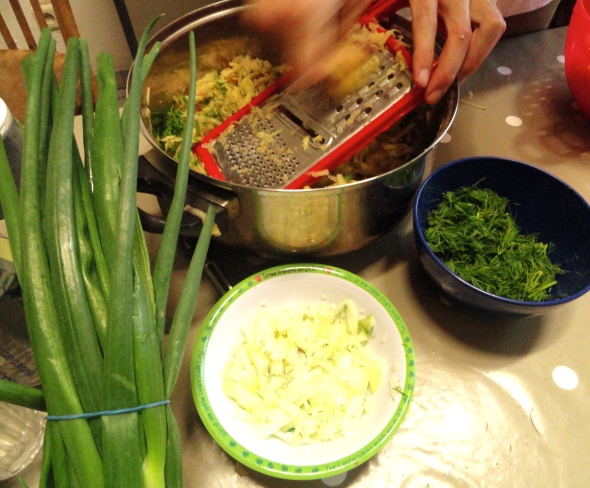 An easy way of eating them is to just place all the condiments on the table and let everyone make their own caviar creation. However, if you want it a bit nicer, place two rösti on each plate, add some of the chopped onion, a generous dollop of creme fraiche, the caviar of your choice, and top with chives, dill and spring onion. Serve with cold, light beer, and vodka if you are going out. 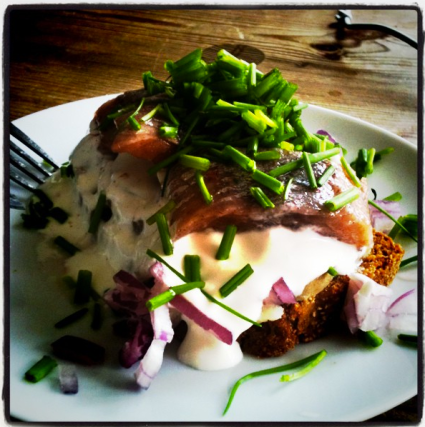 As any Swedophile will know, herring beats meatballs for the title of the quintessential Swedish dish. This recipe (if it can even be called that) is a Swedish classic, perhaps the ultimate herring sandwich. There’s a wide selection of spiced herrings in the land of frost and darkness: onion, mustard, tomato, curry, dill, crayfish, garlic… the list goes on. But the simple matjessill is my favourite. It’s both salty and sweet, spiced with cinnamon, sandalwood and allspice, and sometimes I get cravings for it which knows no boundaries. Every time I go to Scandinavian kitchen in Oxford circus I come home with several tins of the stuff, and then I try re-create this sandwich with English sour cream, imported Swedish bread, red onion and chives. Having served it to several people in London, I’m convinced you don’t need to be Swedish to appreciate the complex fresh flavours of this dish. It makes for an excellent starter in the summer. Or in the winter for that matter, it is always delicious.

For the sandwich you need:

Another sillamacka, with light walnut bread and some dark caviar.

The making of this sandwich is very simple. For the base of the sandwich, you need a slice of kavring bread. This is hard to get a hold of outside of Sweden, so you can substitue with with a sweet rye kind, or make your own*. If you want to add potato or egg to make it more filling, you add them first. Spread some red onion on top of these as well as on the plate. Then add a generous dollop of sourcream on top of this, and add three juicy pieces of matjessill on top. Scatter generously with chopped chives.

* Making traditional kavring at home takes two days and lots of Swedish ingredients. I found an alternative which I refer to as fake kavring: 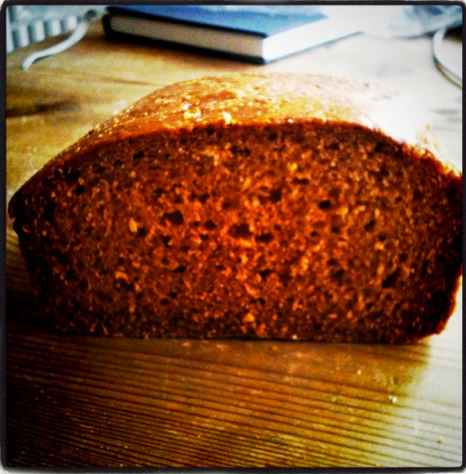 Good thing is it only takes one hour to prepare and bake! You need:

Butter and bread the pan for the oven. Put your oven to 180 degrees. Mix all the dry ingredients together and then add the sour cream, sirup, water and lingonberry. Pour into the pan up to 2/3 for a high loaf. Put in at the bottom of the oven for 1 hour until it is a dark golden brown. Let rest and then slice up thinly.