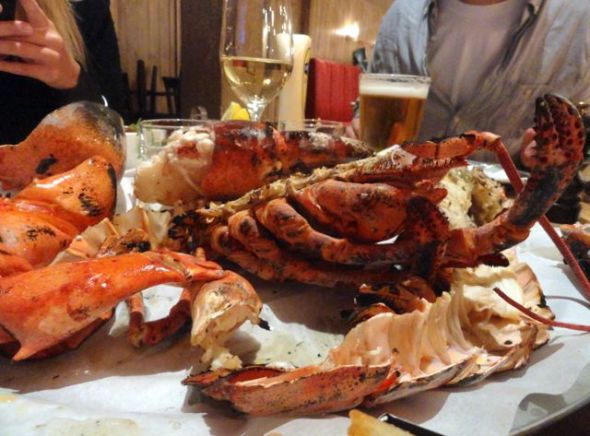 To me, lobster always sounded like lots of fuss for little, and expensive, food. I have no problems with seafood that makes you work for your nibbles: anyone who’s attended a Swedish crayfish party knows the joy of devouring small red sea creatures for a small fingers’ worth of white meat. But since crayfish is cheap and lobster isn’t, I out of hand dismissed lobster. Now I must change that tune, having celebrated the end of university (forever!) together with Miss Salted Cod and some friends at Soho’s newly opened Burger & Lobster. Because it was ridiculously nice. And while it wasn’t cheap, it wasn’t really expensive either.

We arrived to our reserved table for four in the afternoon and the queues and stress I’d been warned about were nowhere to be found. After ordering in a round of Asahi we were offered to choose between a lobster, a lobster roll, or a burger. All would be 20 pounds each. The waitress also suggested a fourth option which we ended up going for: sharing a ten pound lobster between us, with unlimited fries and salad. She even brought him out on a tray whilst he was still alive, saying she’d named him Brett.

As Brett was steamed and grilled off to perfection (we were told he died by a swift cut through the head) we were kitted out with bibs, little lobster-tools and more Asahi. Once cooked and prepared for us, Brett was so large he had to come in on two different trays. He arrived together with bowls of shoestring fries, salad and garlic and parsley butter sauce. The sauce was simply divine dripped onto tender lobster meat, and as we fought away over the best claw meat we almost forgot about the fries and salad, although these were also very nice. A few more rounds of Asahi and lobster picking was loads of fun, and it turns out eating a massive lobster is a nice group activity if nothing else. As we started using Brett’s claws as gloves (see Kristine’s hand above) we decided it was time to move on to a boozier establishment. But as for the quality of the lobster, the price and the overall experience, burger and lobster get a unanimous nine meatballs out of ten from both me and Miss Salted cod. 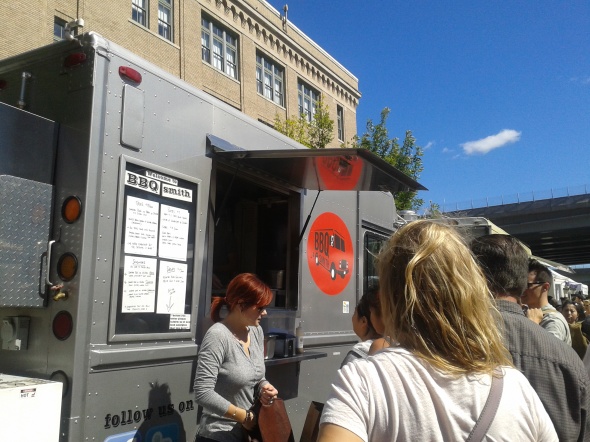 As mentioned in my previous post I took it as my mission to taste as many of Boston’s food trucks as I could. On Sunday I walked all the way to the South End to SoWa Market – a big market that takes place every Sunday. I quickly moved to the food truck section which was already crowded with hungry Bostonians. I started my lunch with a pork taco at BBQ Smith.

For $3 you got a taco filled with crispy and smoky pulled pork topped with avocado salsa and a spicy sauce. This was incredibly tasty and a really good start to my lunch. They also had really good looking sandwiches but I had to save my stomach for my next truck: Lobsta Love. 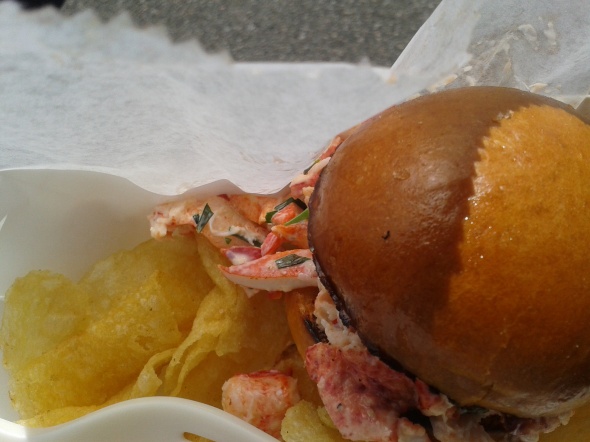 Lobsta Love’s lobster slider was all that Chowda’s slimy lobster roll wasn’t: fresh, not drowned in mayo and made to order. The lobster was mixed with mayonnaise and tarragon but kept its strong flavour. The brioche bun was lightly toasted and seemed to be brushed with butter and was the perfect accompaniment to the lobster. Lobsta Love offered many lobster options including a lobster mac and cheese which I will absolutely have to try before I leave Boston. By this point I was pretty full but could not leave before trying famous cheese melts from Roxy’s Gourmet Grilled Cheese.

Roxy’s Gourmet Grilled Cheese are a bit of food truck royalty as they have won many prizes and have taken part on the Food Network’s Great Food Race, so I knew I was in for a treat. I thought I might as well go all out so I went for the Mighty Rib: Fontina cheese, braised back ribs and caramelised. Yes, ribs, in a cheese toastie! After 20 minutes waiting with other 50 people the beast finally came out. It looked glorious, all cheese and and pork amazingness. This toastie completely changed my idea of what cheese toasties should be and I am definitely recreating this at home. The only thing missing was a bit of spice like some sliced jalapenos or a salsa I could dunk the toastie in. Aside from that…fatty perfection!

All I can say is that Boston is a great city if you like food! Now I can’t wait to go back to London and explore the food truck options there. 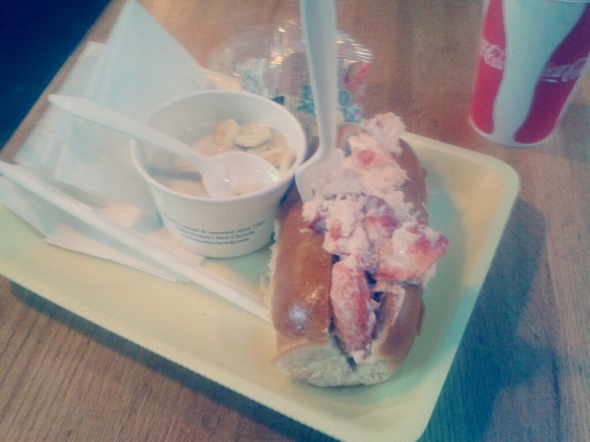 I have to thank miss meatball for actually making this review possible. Back in April she introduced me to a person who would give me a freelance job, which would then turn into a full-time job (with two weeks training in Boston) which turned the poor salted cod student into a working salted cod who can now spend more on food!

I’ve been in Boston for a few days now, but due to jetlag and weird tropical weather, I have only just managed to try clam chowder (or chowda as Bostonians say) and lobster roll – Boston’s two iconic dishes. So I decided to head out to nearby Faneuil Hall and try both at Chowda, famous for its clam chowder and cheap lobster rolls.

I had never tried clam chowder before so I had no point of comparison, but this was good! While it looked less than appetizing (imagine pale yellow goop) it tasted extremely fresh and fishy. It was full of clams and white fish and had a great consistency – not too thick, not too thin. As you can see I only bought a very small portion, but this was extremely filling! I could easily have done with that and a bit of bread on the side.

But, the temptation of a clam chowder and lobster roll combo was too much to resist and I ordered the lobster roll too. Unfortunately this paled in comparison to the chowder. I regretted it as soon as I ordered it…The lobster roll was not made to order but was actually the last one standing in a refrigerated section of the stall. I don’t know if this is simply because I came in at a time when they had run out of fresh lobster or were not busy enough for the lobster roll to be made fresh to order, but what I experienced was a very cold, too sweet lobster roll. Despite the great amount of lobster in the roll it was drowned in mayonnaise and lacked in seasoning. I ate some of the lobster and left the roll which tasted cold and old.

I also have to point out to the horrible service. Having been a waitress myself I think I am allowed to be pretty strict with service. I would say that Chowda has some of the worst service I have ever experienced. Despite being empty (I came in at 5) the two people working there carried on their conversation for a good minute before attending to me. Second, the person serving me actually took a call from his phone while he was serving me. He did not try to end the call or make it brief, he was on the phone the whole time! I found this extremely rude and almost gave up on the food… but the chowder smelt too good and I was hungry.

While the clam chowder was great, I am pretty sure I will not be going back to Chowda anytime soon. I had heard that Faneuil Hall was a bit of a tourist trap for food and this only confirmed it. I will be trying more lobster in the coming days and I hope it is as good as the amazing 10 pound lobster me, The Swedish Meatball and some friends had last week at Burger and Lobster.