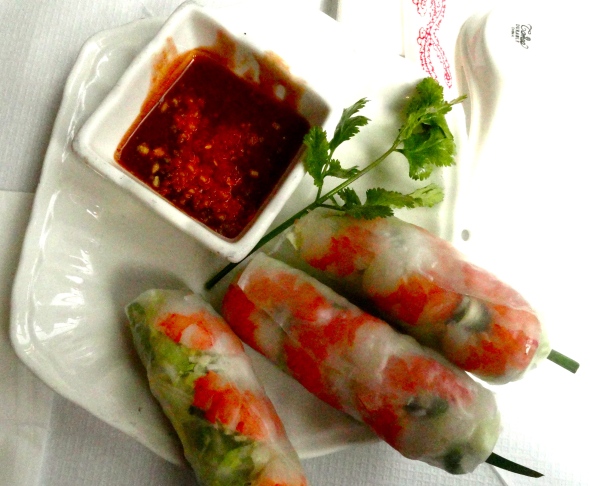 When the pavements are boiling and the parks are full of happy families with loud children running around, sneaking away to the partly abandoned “pho-belt” at the bottom of Kingsland road is quite nice. Normally busy Song Que was half empty on my last visit, a nice break from the normally bustling atmosphere in there. Song Que tend to be the critics’ favourite out of the Vietnamese options around here, and not without reason. It is cheap, friendly and the standard is consistently high (at least every time I’ve been). 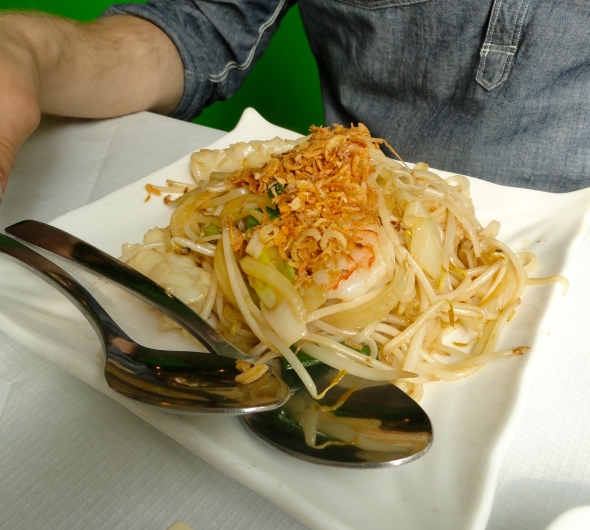 Vietnamese may also be the perfect food for hot days like this, at least refreshing summer rolls and tangy vermicelli. We started off with four summer rolls to share, and they arrived incredibly fast but tasted fresh and juicy, so I doubt they had been waiting around. They were crunchy and the dipping sauce was perfectly spicy, however I lament the peanut sauce that used to be serve with them. Nonetheless,  these are the best summer rolls I’ve tasted in at least a year.

My brother had the mixed seafood stir fry, which he argued was the best out of the lot of what we ordered (me and his girlfriend disagreed, however). They came with fried crispy onion on top and whilst looking rather plain, they were savoury and satisfying. Katrin had the tofu with crispy noodles, which generated an immediate “ah!” and thumbs up to the waiter (which I assume is a good sign). 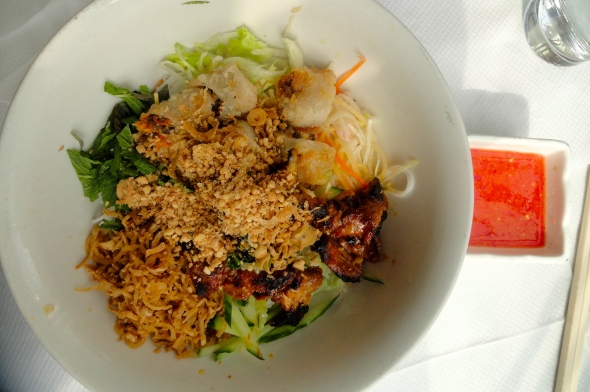 Having tried all three dishes however, I felt like my vermicelli with grilled pork, shredded pork and spring rolls was the true winner. For all the extras that went into it, I found the £7.90 very reasonable. It was refreshing and incredibly aromatic, whilst also perfect summer food with the cool glass noodles at the bottom, the sweet chili sirup and the filling wholesomeness of the newly baked spring rolls. All the fresh herbs and the cucumber made me feel like summer is actually here, whilst sitting inside a quite Song Que and looking out on the busy Kingsland road flashing by. Song Que also do a £5.90 lunchtime special which may come in handy for cash-strapped students, so it’s all thumbs up for this soothing and light restaurant in the summer heat. 7.5 meatballs out of 10. 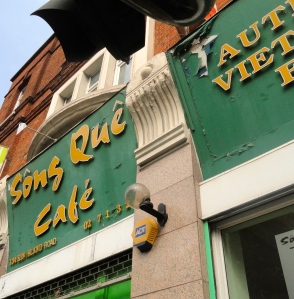 Might as well be honest from the start, this is an endorsement rather than a review. I first discovered Franco’s as a 19 year old confused intern lost in Shoreditch, falling into its welcoming spaghetti arms like a soft-boiled egg (pardon the food analogy). Back in 2007 interns were paid (shocking, eh?), so I used to get lunch from here as often as I could. Neither the menu nor the prices have changed since. The former is of course a sign of quality, the latter is just… lucky for us poor diners. Food is incredibly good value. If you stick to the pasta dishes and avoid going during their incredibly hectic lunch time, it’s worth the journey from other parts of London.

On our last visit, I had vongole, which is spaghetti with a creamy sauce of baby clams, white wine, tomato, parsley and a bit of chili. Bathed in parmesan (you get a large bowl on the table) it is sublime. In fact, vongole is so moorish and creamy and baby-clammy that I’ve never ordered any other dish in Franco’s. Mr Meatball had arrabbiata, a tomato and chili sauce with penne. Whilst that sounds plain, its smokey, garlicky aftertaste and fiery kick makes it very tasty. The portions are massive (inducing severe food coma afterwards) and the chefs work behind the counter so you can see them make your food. With a drink each and proper coffee afterwards, the bill came to £13,80 which is very reasonable. Service is nice, and the atmosphere is friendly and unpretentious (a relief given the area). Really, you should go. Right away.

It’s Friday, you’ve worked all week (or if, like us, you’re a student, you’ve spent your days in the library) and all you want now is to relax, see your friends, (probably get drunk) and not think about cooking at all. This feature is for you! Here I suggest a list of some of my favourite places to go out for a meal without spending a ton of money.

In most of these places, you will not spend more than £15 each, with drinks.