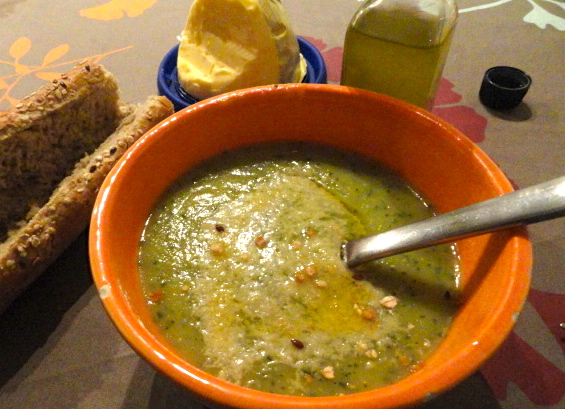 I live with a dramatic Sicilian, and predictably, everything he touches turns into kitchen gold. I’ve stopped taking pride in my home cooking, as everything I make pales in comparison to the humble little dishes Peppe throws together. My favourite soup of his so far is very simple: it has courgettes, potato, onion and garlic. The secret is that it is thickened and made savoury with parmigiano, and has tons of aroma thanks to Peppe’s mother’s own olive oil.

I’m somewhat of an olive oil skeptic, as I feel it’s being used and abused all the time where it doesn’t quite belong. You need look no longer than Jamie Oliver for examples of that, and to illustrate my point I’ll just point you to this hilarious, simple montage from his shows. However, if strong olive oil belongs anywhere surely it is in Sicilian cooking. Of course, sourcing home-made Italian olive oil might be near impossible, but as long as you invest in a very good quality bottle, you should be on the right way. And spending a bit on the parmigiano and olive oil is worth it: coming home to this after a long night at the office and a damp walk home in uncomfortable shoes feels like the most wholesome experience ever. 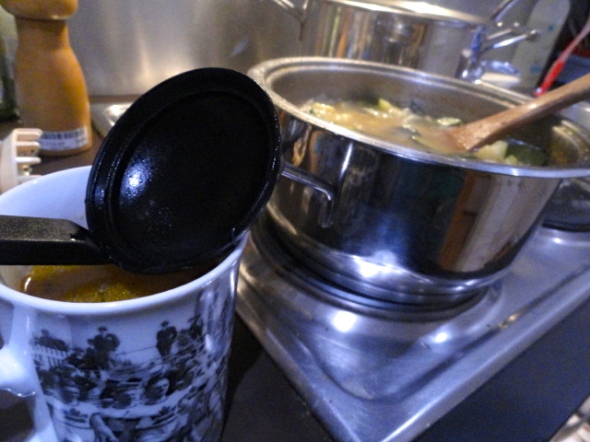 Start by slicing the onions, and then fry them with a generous splash of olive oil in a deep-bottomed pan. Add the whole, peeled garlic clove after a few minutes, and fry on medium heat whilst you peel and chop the potatoes, and chop the courgettes (keep the peel on). Add the courgettes and potatoes together with the stock cube, and add just enough water to make sure everything is covered. Boil for about 20 minutes or until all the vegetables have softened considerably, then take off the heat and spoon out a little bit more than a coffee mug’s worth of water (you can save and freeze this as stock to use on some other occasion). Take to the side and blitz with a blender for about a minute, or until you have a smooth, rather thick soup. Add salt and pepper to taste. When done, serve in bowls with a generous sprinkle of parmigiano and a few additional drops of olive oil, as well as some crusty bread.

After a little break in blogging due to my move to Brussels, I’m breaking my silence with snail soup, aka Caricoles comme à Bruxelles (like everything else, it sounds a lot more appetising in French). My landlady claims this is one of the most common kinds of street foods in Belgium alongside waffles and frites,  but this is highly disputed by Miss Salted cod. Either way, my curiosity  got the upper hand, and I felt obliged to try a pot. An old lady sells these from a stand in the daily market at Parvis in St Gilles, which happens to be my local square (a market which is really lovely by the way, and also open on Saturdays). You can buy twelve escargots in broth for 4 euros, which isn’t too bad if you just want a little try.

Now, I’m a massive fan of French Escargots de Bourgogne, which tend to be smaller, slightly more tender snails drenched in parsley and garlic butter sauce. The soupy Brussels snails, however, did not quite fall to my taste. The broth was great for a cold afternoon in the ubiquitous Brussels rain: warm  and spicy, with loads of celery and white pepper. However, the snails were a bit too large and chewy for me, and did not quite hit the spot for my slightly tender weekend post-beer stomach. Perhaps it was the fault of this particular snail soup stand, but my next culinary street food adventure is probably going to be more safely frites-based.

Now, if you do want to try out the snail soup, or just visit the lovely Saturday food market in St Gilles, you can find it below on the map:

Since I’ve been struck with the season’s first cold, I’ve perked myself up with soup. When I was living with eight other students in Birmingham, I used to get the biggest pan in our house, loads of leek and some leftover potatoes and try make enough of this soup to last me a week. But since there were eight of us, and because this soup is so moorish, all was usually gone by the end of the day. Preparing a weekly radio show with my friend Ella, we used to get too impatient to heat up the leftovers and just eat it cold and thick in mugs (admittedly, that could have to do with the amount of wine being involved with weekly radio planning, but I’d rather blame the deliciousness of the soup). 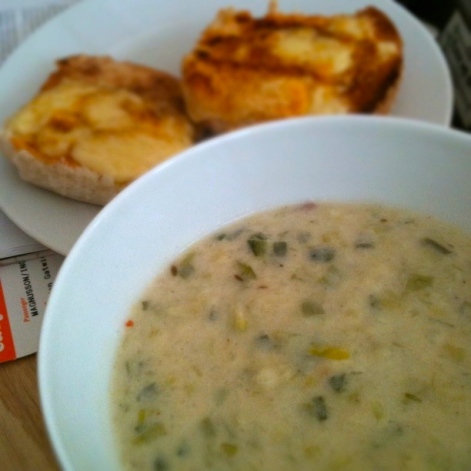 Trim your leeks by cutting off any shabby-lookig bits on the tops, slicing them lengthwise and rinsing in cold water. Then slice them thinly all the way up to the dark green bits. Fry in a large, wide bottomed pan in a generous chunk of butter on medium heat whilst you peel and roughly chop your potatoes. Put your kettle on and boil about 1 litre of water. Add the potatoes into the softened leeks, stir an let fry for a minute or so. Then add your boiling water and the crushed stock cubes. Let simmer under a lid for about 20 minutes, until the potatoes has softened entirely and can be crushed easily with a potato masher. An english-style potato masher is best tool for this, as it gives you a rougher texture than a blender.

Once you’ve crushed away for a minute or so, add the creme fraiche and start seasoning (whilst still on a low heat). Add a few chili flakes, a few generous splashes of Worcestershire sauce, a few sprinklings of ground nutmeg and some cumin seeds. Also add some salt if the stock hasn’t done that job for you. Take the soup off to cool a bit whilst you put your bread under the grill (if you sprinkle the cheese with paprika it starts grilling quicker and looks nicer). Enjoy.