Behold the best tapas I’ve ever had. Two weeks ago I was in Barcelona, and was lucky enough to be taken to Cuidad Contal. Ciudad Contal is the old name for Barcelona, and also a beautiful and popular tapas bar.

Arriving in the afternoon, we avoided the worst queues and were seated rather rapidly after a quick, ice cold beer in the bar (and very cheap at that). The bar had a beautiful display of some of the cold, prepared tapas, and I fell straight away for a beautiful creature resembling a black egg with pink stuff coming out of it. Once seated, Victor managed to decipher my description and ordered fig with mascarpone and jamon (montadito de higo, mascarpone y jamón ibérico, below).

If it’s possible to pick one favourite from the various tapas dishes, this would be it. The sweet, crispy fig mixed with the velvety and rich mascarpone posed a perfect contrast to the salty jamon. It’s no revolutionary dish or combination, but proof that classics are classics for a reason.

Aside from my personal star of the table, a favourite between the three of us was the black rice (arroz negro con sepia). This was also displayed at the bar, steaming and glittering, and quickly vanishing. Just as the other dishes, it was very simple: rice with squid ink and gently cooked octopus, served with a dollop of allioli. It was also accompanied by small pieces of bread rubbed in tomato, olive oil and salt (pa amb tomaquet), which were perfect for scooping the rice. This staple way of making bread has won my heart over, after a long struggle against indulging in olive oil.

We also ordered in some grilled green peppers, doused in sea salt flakes (pimientos del padrón). The grill made them smoky in a mellow way, which contrased very well to the sweetness of the pepper and the salt.

The deep fried baby squid (calamares a la andaluza) was incredibly tender and juicy, perfect with a little dash of lemon. We finished this very, very quickly. Such a simple dish, yet with the added lemon, one of the most bite-friendly things ever. 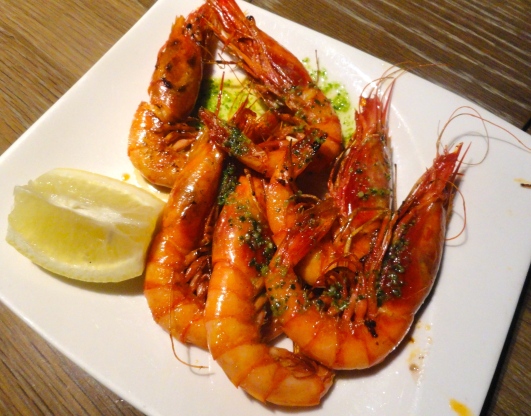 The seafood at this place was so tender it’s difficult to compare it to anything. The gambas (gambas a la plancha) were no exception. I would assume these were steamed, then quickly dressed before going onto the table. They were too hot to hold when they arrived. Again, delicious. 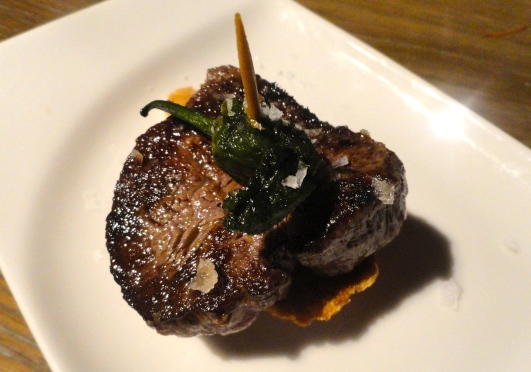 Victor’s personal choice was a little entrecote on a stick (montadito de solomillo). It was charred in the edges and oozing red inside, absolutely perfectly cooked. Blissful.

All in all this was a near-perfect meal (I’m not sure what could be changed gastronomically to improve it). If you’re in Barcelona, you should ignore the fact that this magnificent place is placed at the bottom of touristy La Ramblas, as well as the fact that it’s packed nearly all the time. You should just dive in, and gratefully accept a cold beer (or three) while you wait for a precious table. Our meal landed at 17 euros each with was a bargain given the high quality of the food, and I simply cannot recommend it highly enough. 9,5 meatballs out of 10. 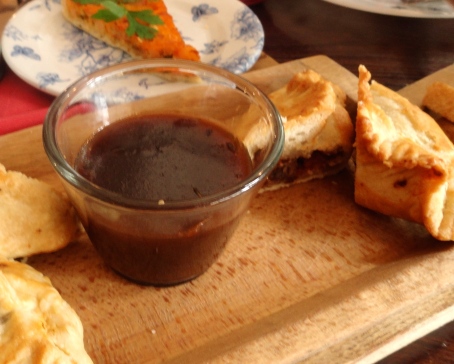 Hidden away in the rather anonymous and uncharming area between Euston and King’s Cross sits Somers Town Coffee house, an unlikely named gastropub specialising in British tapas. “That sounds odd”, the Salted cod said when I told her, but in fact it is carried off very well. The pub in itself is very pretty inside, with sturdy tables, old school armchairs and a door hidden in a bookshelf for the curious (if you dare open it and walk down the staircase you may be rewarded an invite to their “secret” supperclub) and there’s also a beer garden outside. 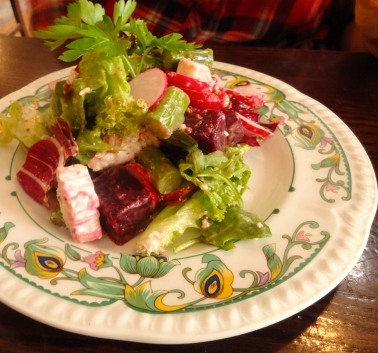 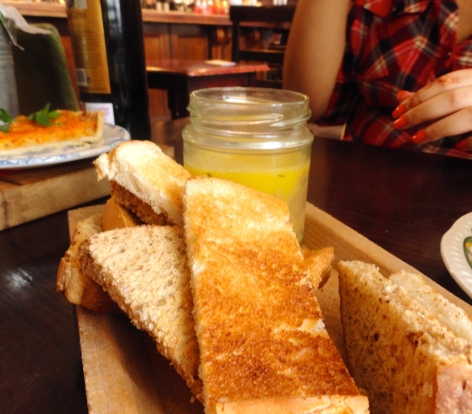 Me and my friend shared six tapas dishes and an excellent bottle of Rioja (there are some Tuesday lunch luxuries only dissertation writing can warrant) which came to about £25 each, so it’s not a very cheap place. But some of the dishes were absolutely fabulous. I found a favourite in the rather blandly named Cheese and onion pie, which was incredibly rich and sweet, with a heavy note of caramelised onion and creamy, light cheddar cheese. Potted crab was also lovely, with tender crab and shrimp spreading out coarsely on the different coloured toast. The salad with asparagus, goats cheese and beetroot was simple but delicious, sampling the best of seasonal without making a fuss. We also had a salmon and prawn tart wich was strong and fresh the way only cooked smoked salmon is, with strong hints of dill.

The only let-down was the beef, stilton and stout pasties which had way too much pasty on them and were too dry, with no note of stilton. The jus that came with them was sweet and lovely, and complimented other parts of our dishes well. Since we were hungry we also opted for chips as one of the plates, which were perfectly fine, especially with the jus from the steak pasties, but being… chips, there wasn’t that much to wow us about them.

All in all, it was a lovely eating experience, and we both walked out full and content. This is a good way of sampling little bits of classic British food and when I come back (and I hope I will) I’d love to try the gourmet scotch egg, the smoked applewood chunks, de-shelled popcorn mussels and the marinated pork belly lollipops. If I add that smooth bottle of Rioja, maybe I’ll actually dare enter the bookshelf staircase for the supperclub. 7,5 meatballs out of 10. 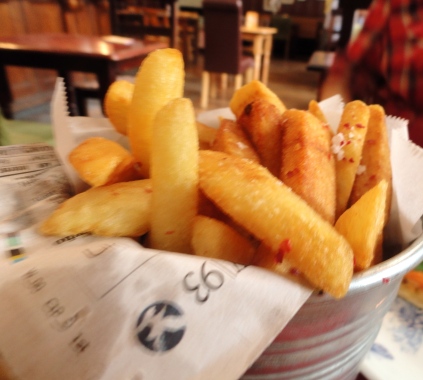 Somers town Coffee House can be found here on the map: