It is time for another post on traditional Swedish food – husmanskost – and this time one of my father’s absolute favourites. Isterband is a smoky, slightly acidous and grainy sausage made of heart and tongue, originally from the Småland region. It is typically served with stewed potato and pickled beetroot, and to me it tastes of autumn like few other things – it belongs with the smell of burning leaves and crisp air. It is hearty, warm and packed with flavour. 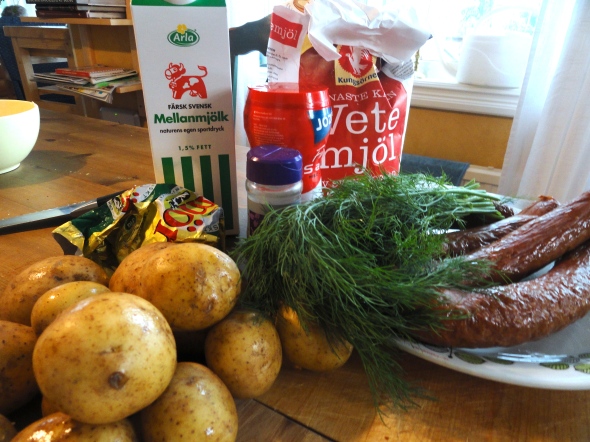 – 1 pack of Isterband (this will be difficult to get a hold of outside of Sweden, but could probably be substituted with some other kind of large smoked sausage).

– One heap of fresh dill, chopped

– A few tablespoons of flour

– A few decilitres of milk

– Salt and white pepper to taste

– A jar of sliced pickled beetroots

Dill stewed potatoes is a mild, standard side to any smoky Swedish food, and very easy to make. It relies on the usual suspects for flavouring (dill and white pepper) together with the creaminess of milk and butter. Start by peeling, slicing and boiling the potatoes. Make the slices thick so that they don’t break in the water, and be careful not to overcook them. Start frying the sausages on a low heat in a wide pan (they should fry for about 25 minutes). Then make a bechamel base by melting the butter in the pan, and carefully whisking in flour until you have a thick paste. 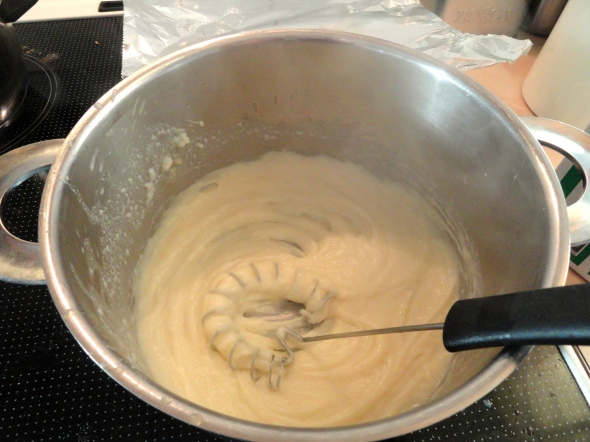 Add milk slowly to the paste, to make a thick, creamy sauce. You can choose how voluptuous you like the sauce to be – if you want the supreme, extend it with cream or a bit of creme fraiche. If you’re feeling frugal, go with milk, which is the classic way of making it.

One you’ve reached a thick, smooth consistency, add salt and white pepper (you can be rather generous). Add the chopped dill and some nutmeg, then pour the sauce over the potatoes. Take the sausages off the pan and serve immidiately. The heavy smokiness of the sausages is rather dominant, and the potatoes are there to provide a smooth, mild balance. By serving this with pickled beetroot you also get a sweet contrast to the rest. It’s a well-balanced, autumnal and most warming meal. 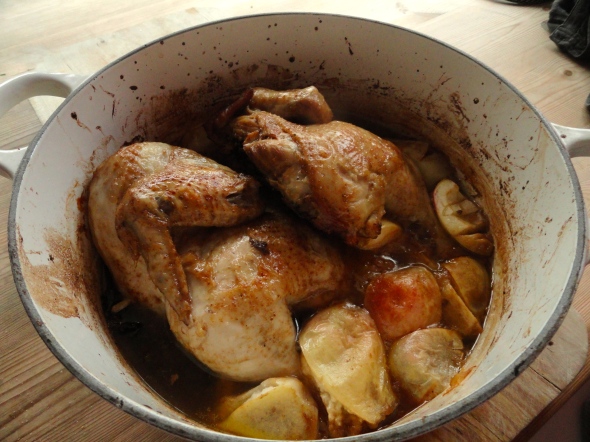 This is my great grandmother Rut’s recipe, and perhaps my favourite recipe of all time. My grandmother, who would make this on Sundays, was born in a small unpronounceable village called Djurröd in Skåne. Only 84 people live in Djurröd. The centre of Djurröd looks like this, and perhaps the desolate nature of Djurröd explains why my family still eats chicken with plums and apples when other Swedes save it for medieval themed-feasts. But who cares – the sauce accompanying this chicken is superbly savoury, creamy and sweet, and the cucumber pickle goes beautifully with it.

Start by cleaning and preparing the chicken. Untangle the wings if they’ve been tucked into the back, cut off unnecessary fatty bits (by the neck and back), and remove any leftovers of feathers. Cut the chicken in half through the filets with a sharp knife, and rub it all over with the salt and white pepper. It’s handy to keep it in a mix on the table as you prepare the chicken. 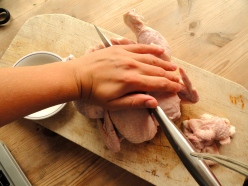 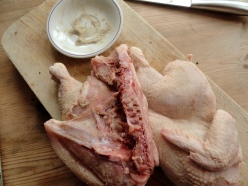 When you’re done preparing the chicken, melt the butter and some tablespoons of oil in an oven-safe pan on the stove (it’s good if it has a lid, and can be put into to over, but you can also start in a frying pan and move the chicken to an over-proof form later). Add the chicken to the pan, and let it fry gently for about five minutes on each side. Brush it with chinese soy whilst it’s frying. Then add three decilitres of water, one cube of chicken stock, and put it into the oven on 200 degrees. In the meantime, peel the potatoes and let them rest in cold water. Start making the cucumber salad (recipe further below).

After about 30 minutes, take out the pan, prick the chicken and pour the juices from the pan all over it (make sure the filets face upwards). Add the prunes and apples to the pan, and put it back into the oven. Try to push the apples and prunes towards the bottom of the pan, or below the chicken. After another 15 minutes, take it out again to again douse it in juice. Put the pan back into the oven, this time without the lid on. After about another ten minutes, the chicken should be done and ready to take out. Watch the chicken carefully if it’s smaller, as the cooking time may range from 40 minutes to over one hour depending on size.

Remove the chicken from the pan, leaving the juices inside. Let the chicken rest by the side as your prepare the sauce, keeping it somewhere where it keeps its heat. Also remove the potatoes and the prunes and put somewhere else ( they’re not pretty, but you can serve them as condiments to the chicken later on). Sift the leftover juices if you prefer the sauce thin (I never minded random bits of chicken in it), and then carefully scoop out excess fat with a slotted spoon, holding the pan at an angle. Mix in some flour with a whisk, as well as sugar, and let it come to the boil and thicken. Then add two deciliters cream (or to taste, depends on how strong you want the sauce), and spice is more with salt, white pepper and soy according to taste. Remember that the sauce should be a little bit to strong in flavour on the tongue on its own, as it needs to liven up both the chicken and the potatoes. Serve the newly boiled potatoes with the pickled cucumber, chicken pieces and sauce right away. 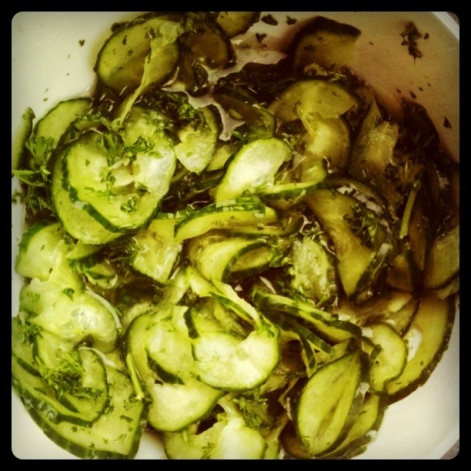 Pressgurka is a classic component of Swedish traditional food (husmanskost) and can be served alongside most dishes where lingonberry jam would also feel at home. It is sweet and tangy, and contrasts perfectly to salty Swedish dishes such as roast chicken, fried herring, or even meatballs. You need:

Making pressgurka is very easy. Slice the cucumber with a cheese-slicer, and squeeze it gently with your hands for about one minute. Mix together the ättika, water, salt, white pepper, and parsley, and put in the fridge for at least one hour. Serve alongside the chicken. 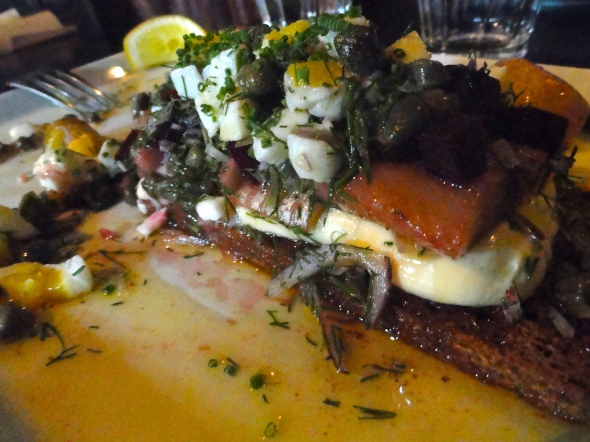 This is a rather short post, just a little shout-out to the best herring sandwich I ever had (I wrote about this Swedish delicacy and how to make it at home a while back). Two weeks ago I had the pleasure of attending my cousin’s wedding in the Swedish mountains, at Hotel Fjällgården in Åre, close to the border of Norway. The scenery is, as might be expected, breathtaking, but being an utter food-pig this sandwich was the star of my weekend. (Apart from the beautiful bride, of course).

This sandwich was more voluptuous than a normal matjessillmacka, as it was much bigger and, frankly a bit excessive. It had all the key building blocs: delicious matjes herring (the best kind, in my humble opinion), Swedish soured cream (gräddfil), red onion, chives, potato, warm sweet dark bread and boiled eggs. In addition, it was sprinkled with small bits of beetroot and capers, which sharpened the salty-sweet scale. But the magic ingredient was clarified butter, which was doused (very generously) on top and gave it a sweet, even caramelised flavour. Hardly healthy, of course, but ridiculously delicious. Not that one passes by Åre every other day, but if you do, make sure to take a trip up the ski slope to Fjällgården, for this sandwich is absolutely worth the hike.

Unfortunately, Sweden isn’t really a cheese country. Moving to the UK altered my relationship with Swedish cheese for good, as I realised that even the English do it much, much better than us. Rather predictably, this alienation has only increased since I moved to cheese-loving Belgium. However, there is one exception to the Swedish cheese rule: Västerbottensost. It’s about the only internationally famous Swedish cheese aside from mesost (a sweet, caramel-tasting soft cheese from the north. I refrain from comment). Västerbottensost is skinny for a cheese, and quite salty. Friends who ate it this weekend likened it to parmesan, but nuttier. And it melts and browns beautifully in a very rich quiche (Västerbottenpaj). I was lucky to have two Swedish friends visiting this weekend to help out making one. 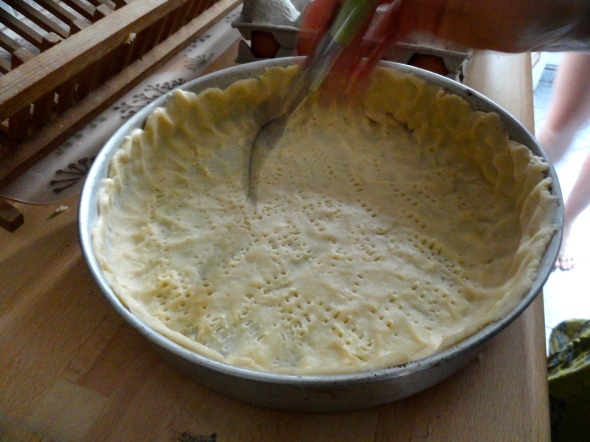 Start by chopping the butter, mixing it in with the flour. Once a dough is formed, add two tablespoons of cold water and form to a ball. Put the ball in the middle of round cake-tin, and push it out towards the corners until it covers the entire tin. Prick it all over with a fork, and pre-cook it in the oven for 10 minutes at 200 degrees.

Grate all the cheese and mix it with the eggs, cream and salt, together with some black pepper. Once the quiche base has been in the over for 10 minutes, take it out, and carefully pour the cheese mix into it. Put it back into the oven for another 30 minutes (keep a close eye on the it, but don’t panic it if the cheese goes a bit brown: it’s meant to look rather dark when it’s done). Let cool for a while before you serve it, because it’s best served lukewarm (or lagom warm for this sort of quiche – lukewarm sounds a bit meh). It’s very rich, so it is best accompanied by some other dishes too.  Enjoy! 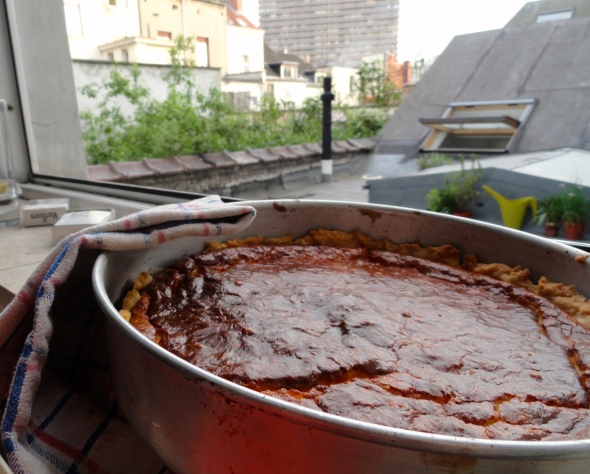