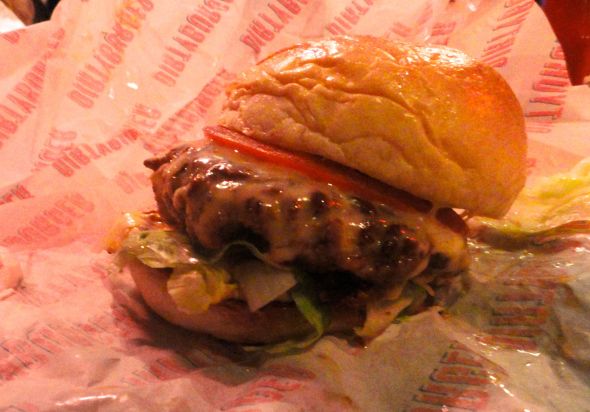 This is the best burger I’ve ever had in London. I would say it’s the best burger full stop, but I’m too sentimental about In&Out burgers in San Diego to give that title away. But seriously, this is one of the juiciest and most perfectly balanced burgers I’ve ever come across. It comes from Dirty Burger, which is a newly opened burger shack at a backyard in Kentish town. The area is a bit unwelcoming, but for the amazing burgers, this is absolutely worth the detour.

There’s only three things on the menu: cheeseburger, fries and onion rings. We ordered all three. The burger was made up of a perfect patty – perfectly sealed, made of finely ground mince and hot but rare in the middle. The meat was tasty, juicy and very well spiced – and dare I say it, one notch better than Meatmarket! The cheese was strong, and added a savouriness to the whole thing which I find is unusual for cheeseburgers unless you go for a black & blue variant. It was topped with a creamy dressing, lettuce, thinly sliced tomato and pickle. And then there was the bun, which I read (madly enough) held a 15% fat content. It was glazed, and when you bit into it it oozed a little. In all it’s unhealthiness this is simply sublime, and a bargain bite, given how gourmet it is, at £5.50.

The chips were nice, double fried and crinkle cut which made them very crispy on the outside but nice and soft within. The only drawback were the onion rings. Both me and Mr Meatball could have done without them: they just tasted of batter and weren’t salty enough. Thus I must disagree thoroughly with Timeout’s raving about them. But perhaps it’s me who has a problem with onion rings, I always find there’s too much batter and not enough salt. 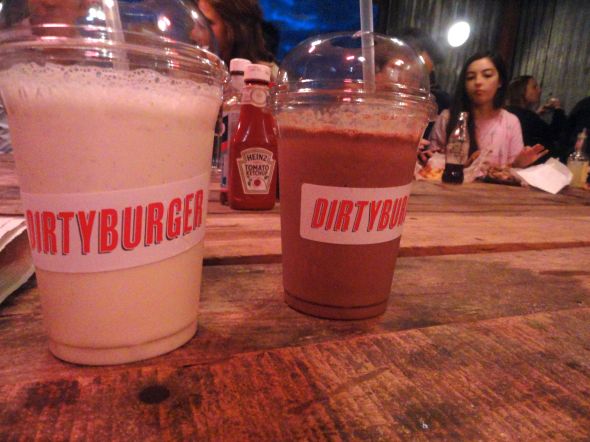 The lovely staff gave us two free milkshakes as they messed up our order, and the vanilla Milkshake was loose and sweet, which I like. Not stodgy and frozen like McDonald’s. Dirty Burger has a cute shack eating area, but sadly it doesn’t have the same people-watching view as Meatmarket. The sides aren’t quite as brilliant either. However, given the affordable price and the insanely nice cheeseburger, it is awarded 8.5 meatballs out of ten.

Yesterday I ventured south of the river for a few drinks with my friend Nelson and stumbled across this little gem. We were originally set to go to Elephant & Castle but I failed to meet Nelson’s challenge of finding a nice after-work place to eat and drink there – is there not much in Elephant & Castle or does someone know of some diamonds in the rough? Recommendations are appreciated (especially by Nelson who lives there). Either way we went to Borough instead, and found the Roebuck.

The Roebuck is a lovely little pub with airy rooms and a chilled out atmosphere. They have a very thoughtful selection of flowery British ales and wheat beers on tap, sourcing from local breweries such as Meantime in Greenwich and Sambrook’s in Battersea (on a related note, pardon the blurry photos…). Their food is excellent too. Nelson who is veggie had the Celeriac rösti burger with kidney bean salsa and sour cream. Having been a veggie all his life, he said the burger in itself was an 8.5, as the flavours were lovingly planned and it was freshly prepared from scratch. If anything it was a little too rich in the cheese, but given the fact that it was a veggie burger, I can’t seriously take the “too rich” as a problem. The portion of chips was in the smallest category, sadly, as this would otherwise had been quite a bargain at £7.75.

Happy Nelson and his celeriac burger

I had an absolutely delicious pan fried coley (a regional white fish which happens to be a sustainable alternative to the over-fished cod) with cauliflower puree and courgette batons with garlic butter sauce (pictured at the top). The skin was crisp and packed full of flavour, and melted incredibly well with the tender fish and subtle cauliflower puree. The garlic butter sauce felt lush and a bit lavish, and was lovely. I often complain over England not being fish-loving enough (in comparison to my fish and seafood-obsessed Swedes), but this little revelation will certainly make me try fish in gastropubs more often. The coley at the Roebuck holds gastropub standards, and at £11.50 I thought that was rather cheap – but then again, the portion was quite small, so it’s more of a tasty treat than a filling main for a starving person.

All in all, the Roebuck is a very nice little pub. A real effort has clearly been put into creating interesting, locally sourced and freshly prepared food, and the ale selection is very satisfying. Go for a mid-week treat when you want to chill and have some good food, as the atmosphere seems a bit south of the river too – not too stressful, never packed, but very friendly and relaxed. If the portions had been of slightly bigger size me and Nelson would have given it 8 meatballs out of 10, but we settled for 7.5/10.

On the meatball and salted cod map:

After days after days of revising the metaphysical aspects of IR theory, we thought we deserved a fatty break as exam-prep and headed to Meatmarket in Covent Garden today. We were drawn to it because of its relation to Meat liquor (which Isabel has declared previous love for here), and simply couldn’t resist a place with dishes like “Dead hippie burger”. The decoration around the counter is rather random as you have a view of the tourist-packed inside of the Covent Garden Market, whilst surrounded by True Blood-style accessories of a nitty gritty fast food place (plastic knives and forks, industrial sized condiment packages stored in chicken cages at the sides, a big roll of kitchen roll places on each table to wipe off grease), but it is all carried off very well. Playing on their name, the ceiling is full of little tweet-style signs carrying messages of cheesy contact ads filled with meat puns.

We skipped the fries and went for jalapeño poppers with rance sauce as a side, and then opted to share a dead Hippie burger and a Philly cheese steak. Had we not decided to go for a coke each, the bill would have landed on £14 for us both, which is very reasonable given the greasy fulfillment the food gives you. We got one refillable coke each at £2.50 which is very good value considering you can refill it as many times as you want. 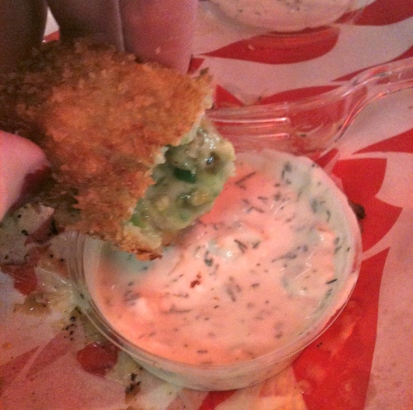 Now, the food. The Dead Hippie Burger came charred on the outside and perfectly medium rare on the inside, and was high stacked with two patties, cheese, pickles, Dead Hippie Sauce – of course – and lettuce. For me this didn’t taste like the sauce from previous versions of the Dead Hippie but tasted like McDonald’s ‘sauce for fries’ sauce which you can only find in Portugal and which I (Salted Cod) absolutely love! So that was a nice extra. The bread was glazed and sweet and it was all so very lovely, in a drippy sense. The Philly cheesesteak is basically shaved steak fried with peppers and cheese, all pushed into a glazed hot dog roll. Simple as that sounds, it was chunky, sweet from the pepper, and gorgeous. Most likely also heart-attack inducing. The final decadence in the jalapeño poppers was so over the top it was kind of funny, but somehow ridiculously nice. The deep fried cheese balls with jalapeño were perfectly spicy, and they were served with a dill, mayo and sour cream ranch dressing which added to the deep fried grease by making it taste rich and fresh. So easy to overeat, and so so satisfying.

So the tip is: go on a rainy day when the market hall isn’t too hot, and never ever bring anyone with a heart condition. Else you should be fine. Not as good as Meat Liquor (less choice of food and drinks) but a good 8.5 meatballs out of 10.